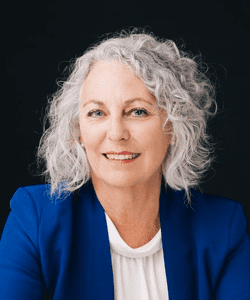 Vicki Chandler, Ph.D. is Provost and Chief Academic Officer at Minerva University. Prior to joining Minerva she was Chief Program Officer, Science, at the Gordon and Betty Moore Foundation. While at the Moore Foundation she and her team launched a number of new programs, including the HHMI-GBMF Plant Biology Investigator Program.

She studied biochemistry for her undergraduate and doctoral degrees at the University of California, Berkeley, and the University of California, San Francisco, with Dr. Randy Schekman and Dr. Keith Yamamoto, respectively. She then pursued postdoctoral research at Stanford University in maize genetics with Dr. Virginia Walbot and was on the faculty at the University of Oregon and the University of Arizona. Dr. Chandler’s research is on paramutation, a transfer of gene expression patterns from one generation to another. Her lab demonstrated that communication between genes is mediated by unique tandem repeats (identical or nearly identical adjacent strands of DNA) through a RNA-directed mechanism that reduces gene expression, but does not involve changes in the gene’s DNA sequence. Gene interactions in parents that affect gene function in progeny could contribute to unexpected inheritance patterns that would complicate identifying the genes involved in complex human diseases and quantitative traits in other organisms.

Dr. Chandler has been President of the Genetics Society of America and the American Society of Plant Biologists. She was elected to the National Academy of Sciences in 2002 and was appointed by President Barack Obama to the National Science Board in 2014. Other honors include the Presidential Young Investigator Award, Searle Scholar Award, American Association for the Advancement of Science Fellow, election to the American Philosophical Society and receiving the NIH Director’s Pioneer Award. She has served or currently serves on advisory boards and panels for the National Research Council of the National Academy of Sciences, National Science Foundation, Department of Energy, National Institutes of Health, Howard Hughes Medical Institute, Paul G. Allen Foundation, and SoAR Foundation. Dr. Chandler has chaired numerous conferences and served on the editorial boards of several journals. 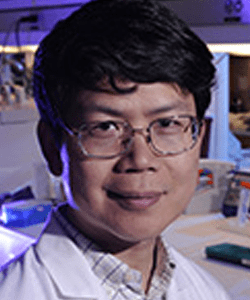 Zhijian ‘James’ Chen is an Investigator of Howard Hughes Medical Institute, and Professor in the Department of Molecular Biology at the University of Texas Southwestern Medical Center at Dallas. He is also Director of Inflammation Research Center and George L. MacGregor Distinguished Chair in Biomedical Science at UT Southwestern. Prior to moving to Dallas, Chen was a senior scientist at ProScript Inc. where he helped discover the proteasome inhibitor VELCADE, a medicine used for the treatment of multiple myeloma. After joining UT Southwestern in 1997, Chen discovered the regulatory role of ubiquitination in protein kinase activation in the NF-B and MAP kinase pathways. In addition, he discovered the Mitochondrial Antiviral Signaling (MAVS) protein that reveals a new role of mitochondria in immunity. More recently, Chen discovered cyclic GMP-AMP synthase (cGAS) as a cytosolic DNA sensor and a new cyclic di-nucleotide signaling pathway that mediate innate immune responses in animal cells. For his work, Chen has received numerous honors including the National Academy of Science Award in Molecular Biology (2012), the American Society of Biochemistry and Molecular Biology (ASBMB) Merck Award (2015), the Lurie Prize in Biomedical Sciences from the Foundation of NIH (2018), the Breakthrough Prize in Life Sciences (2019), and the Switzer Prize (2019). Chen is a member of the National Academy of Sciences. 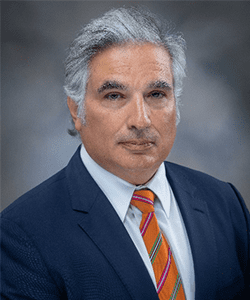 Dr. Cigarroa is a third generation physician. He attended Yale University and graduated from Southwestern Medical School in 1983. During his postgraduate training, he became Chief Resident in General Surgery at Massachusetts General Hospital and completed fellowships in Pediatric Surgery and Transplantation Surgery at Johns Hopkins Hospital in 1995. During surgical training he spent two years in the laboratory under the guidance of Dr. Patricia Donahoe studying fetal growth factors and inhibitors including receiving a research fellowship by the American Society of Transplantation Surgery.

Upon completing his surgical training, Dr. Cigarroa joined the faculty of the University of Texas Health Science Center at San Antonio (UTHSCSA) in 1995, where he served as director of pediatric surgery and transplantation. He established a multidisciplinary pediatric transplant program focused on kidney, liver and intestinal transplants with outstanding outcomes.

The University of Texas System Board of Regents selected Dr. Cigarroa as the third President of UTHSCSA in 2000, where he served until 2009, at which time he was selected to become the Chancellor of the University of Texas System. His leadership resulted in the UT Board of Regents authorizing the establishment of the Dell Medical School and the University of Texas Rio Grande and its Medical School. In January of 2015, Dr. Cigarroa completed his tenure as Chancellor and assumed the Directorship of the Pediatric Transplant Program at UTHSCSA. In January 2019, he became the Director of the Transplantation Center. Dr. Cigarroa has had significant impact in enhancing the overall mission of UTHSCSA and the UT System including in the field of philanthropy.

Dr. Cigarroa became a Clayton Research Scholar in 2016, and has a multiyear grant studying Hepatocellular Carcinoma in Hispanics from South Texas. He has published in peer review journals. He is on the editorial board of the Journal of the American Medical Association. He is the director of the Transplant Center’s Biorepository and fosters collaboration across various departments.

Dr. Cigarroa is the recipient of numerous awards and a member of important academic societies. He was awarded the Massachusetts General Hospital Trustee’s Medal in recognition of his contributions to the advancement of medicine and recipient of the International Recognition Award by the Denton Cooley, M.D. Cardiovascular Society including Universidad National Autonoma’s President’s Award in Medicine. In 2018, he was awarded the American Medical Association’s highest honor for medical education. He is a member of the National Academy of Medicine and Mexico’s National Academy of Medicine, a Fellow of the American Academy of Arts and Science, and member of the Council on Foreign Relations. He is past President of the Texas Academy of Medicine, Engineering, Science and Technology. He is the current Chair of the Ford Foundation and a trustee of the Josiah Macy Foundation, which funds innovations in health professional education.

Former Texas House Speaker Joe Straus has spent his career at the intersection of public policy, business, and politics. He served as Speaker of the 150-member Texas House from 2009 to 2019, making him the longest-serving Republican Speaker in state history, and earned wide acclaim for his thoughtful approach to the state’s challenges.

Under the leadership of Speaker Straus, the Texas House focused on improving public schools and workforce readiness, funding the state’s water plan, directing billions of additional dollars to transportation improvements, increasing transparency in state spending and balancing the biennial Texas budget amid both prosperous and challenging economic conditions. Speaker Straus also prioritized mental health care and the protection of abused and neglected children. He consistently promoted pro-business policies and fought against discriminatory legislation that would have harmed the Texas economy and marginalized many citizens. For that reason, the Dallas Morning News named him its 2017 Texan of the Year.

A national leader within the Republican Party, Speaker Straus is the past Chair of the Republican Legislative Campaign Committee, where he forged strong relationships with legislative leaders across the country. He continues to engage with the State Legislative Leaders Foundation, serves as a member of the Honorary Board of Directors at the SMU John Goodwin Tower Center for Political Studies, and serves on the Texas Biomedical Research Institute Board of Trustees. He is also Co-Chairman of Early Matters San Antonio, an organization that is working to rally the local business and civic community around the importance of high-quality early childhood education for all children.

Speaker Straus is a Principal with La Cima Partners, LLC, a strategic consulting business. He is also a Partner in Bennett & Straus, LLC, a San Antonio-based insurance, investments and executive benefits firm.

Speaker Straus is a fifth-generation Texan and a San Antonio native. He is a graduate of Vanderbilt University. He and his wife, Julie, live in San Antonio and have two adult daughters. 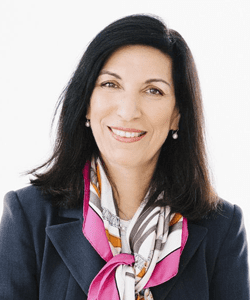 Huda Zoghbi is Professor of Pediatrics, Molecular and Human Genetics, Neurology, and Neuroscience at Baylor College of Medicine, an Investigator with the Howard Hughes Medical Institute, and the founding Director of the Jan and Dan Duncan Neurological Research Institute at Texas Children’s Hospital.

Zoghbi’s interests range from neurodevelopment to neurodegeneration. Her discovery (with Harry Orr) that Spinocerebellar Ataxia type 1 is caused by expansion of a polyglutamine tract and her subsequent studies that such expansion leads to accumulation of the mutant protein in neurons has had profound ramifications since many late-onset neurological disorders involve similar accumulations of disease-driving proteins. Zoghbi’s work in neurodevelopment led to the discovery of the gene Math1/Atoh1 and to showing that it governs the development of several components of the proprioceptive, balance, hearing, vestibular, and breathing pathways. Zoghbi’s group also discovered that mutations in MECP2 cause the postnatal neurological disorder Rett syndrome and revealed the importance of this gene for various neuropsychiatric features. Zoghbi trained over 85 scientists and physician-scientists and is a member of several professional organizations and boards. She has been elected to the National Academy of Medicine, the National Academy of Sciences, and the American Academy of Arts and Sciences. Among Dr. Zoghbi’s recent honors are the Pearl Meister Greengard Prize from Rockefeller University, the Shaw Prize in Life Science and Medicine, the Breakthrough Prize in Life Sciences, Canada Gairdner International Prize, and Honorary degrees from Yale University, Harvard University and the University of Massachusetts Medical School, and most recently the Victor A. McKusick Leadership Award, American Society of Human Genetics.